The Jungle is a biome in the North-Western area of Fortuna III. 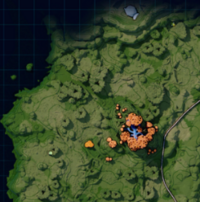 Dangerous and rewarding, the maze-like jungle is full of dangerous creatures, hard to navigate territory, and is home to the Crashed Ship and Jungle Camp. The Jungle is one of the best places to get loot in Bright Sands. The Creatures are extremely dangerous compared to the enemies you would find elsewhere in Bright Sands. These creatures include, Marauders, Ticks, Rattlers (and their mature variant), and Striders (and their heavy variant).

The Jungle consists of very rocky terrain that is extremely easy to get lost in. While it is about to storm, (or it is storming already), it is extremely difficult to see and locate enemies. It is home to the Jungle Camp and Crashed Ship.

The Jungle has some of the most sought-after and rare loot that you can get in Bright Sands. This includes, (but not limited to), Smart Mesh, Polymetallic Prefabricate, Autoloaders, Print Resin, Hydraulic Pistons, Co-TEC MultiTools, and other high-tier loot.

Jungle contains one evac location at the north-east side of Jungle, next to Dig Site

Retrieved from "https://thecyclefrontier.wiki/w/index.php?title=Jungle&oldid=5135"
Cookies help us deliver our services. By using our services, you agree to our use of cookies.