From The Cycle: Frontier Wiki
Jump to navigation Jump to search
Strider 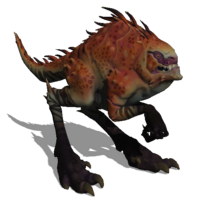 A small but fast creature capable of chasing down prospectors, biting and slashing them with its claws. Easy to kill, but there is always more then one. Like every hostile creature they will attack you on sight or upon hearing a sound, such as a gunshot.

When there are no prospectors nearby the Strider can do two different actions. The first is sleeping on the ground for some time, from which it wakes up from upon hearing a sound. Alternatively the Strider can roam around an area, effectively patrolling it.

If the Strider reaches a prospector it will attack them with bite and slash attacks. A Strider cannot jump or climb, which means that a prospector can stand on a ledge or object and the Strider will not be able reach them.

A Heavy Attack from a Knife kills a regular Strider in one hit, making it an effective way to take out Striders in relative silence.

The Strider has one variant, the Heavy Strider.

Retrieved from "https://thecyclefrontier.wiki/w/index.php?title=Strider&oldid=4783"
Category:
Cookies help us deliver our services. By using our services, you agree to our use of cookies.