From The Cycle: Frontier Wiki
Jump to navigation Jump to search
Rattler 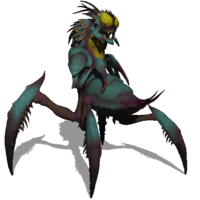 The Rattler is armored creature that spits a stream of burning acid at prospectors before coming closer and attacking with its insect like maw.

Similar to the Strider when no prospectors are around the Rattler sleeps or wanders around looking for potential prospectors. When it notices a prospector it makes a loud insect like screech, before it starts charging up its acid spitting attack to try killing the prospector

The Rattler has one variant, the Mature Rattler

This is detailed information about the Rattler.

This section is a stub. You can help The Cycle: Frontier Wiki by expanding it.

Retrieved from "https://thecyclefrontier.wiki/w/index.php?title=Rattler&oldid=4785"
Categories:
Cookies help us deliver our services. By using our services, you agree to our use of cookies.