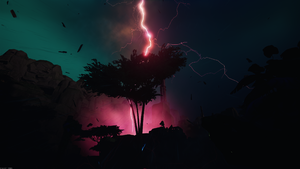 An ongoing storm with a lightning strike

The storm, also called The Cycle, is a game mechanic in The Cycle: Frontier. The weather on Fortuna III is unpredictable and dangerous, with it fluctuating between clear skies and pitch-black storm. The storm lasts a total of

The storm is split into two phases:

During the entire storm it becomes pitch-black and therefore hard to see. When the Storm reaches the Storm Peak period, lightning will strike more often.

During the storm, Prospectors cannot call an Evac Ship at an Evac location. Ships called before the storm started will still land during the storm.

Lightning will strike during the storm. There are two types of lightning:

The Teratomorphic Energy Field, more commonly known as The Cycle, is a hazardous radiation effect that encompasses the entire planet of Fortuna III, though there exist 'windows' that allow for humans, and their technology, to operate without suffering the worst effects.

Initially only causing delicate equipment to malfunction, each wave, found to be following a predictable cadence, increased in intensity until basic machinery failed entirely and colonists were left unconscious for the duration. Less than a month after the colonies were evacuated the energy field settled over the entire world, with its ebb and flow causing terrible storms over the areas not fully covered by The Cycle.

Retrieved from "https://thecyclefrontier.wiki/w/index.php?title=Storm&oldid=8072"
Category:
Cookies help us deliver our services. By using our services, you agree to our use of cookies.