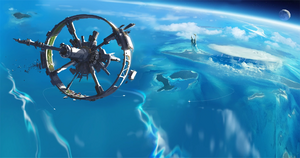 Fortuna III is the setting of The Cycle: Frontier, a backwater planet on the frontier of galactic civilization. This hunk of rock would normally be ignored, were it not for the incredibly riches that dot its surface. Riches that every faction in the galaxy would pay top credit for, if it could reach it reliably. As it's so far away, everyone has to rely on whatever freelancer, mercenary, or fool is willing to risk the storms and brave the wildlife for a paycheck at the end of the day.

For better or worse, the law is an abstract concept outside of Prospect Station, meaning it's do-as-you-please (or rather, shoot-as-you-please) once you're planetside. Just don't get distracted by the megastructures left by the other aliens that landed on the planet and tried to make it theirs, before the Federation tried it and got whipped again.

When deploying onto a map, the exact area (landing spot) that the drop pod will land is semi-randomly chosen. There are several pre-determined landing spots, one of which will be chosen, given that there are no players too close. When in a team, all team members will land at the same spot (Sometimes, this does not happen, as there is a bug that may cause other team members to spawn at an entirely different landing spot).

Generally, the landing area will not be dangerously close to other prospectors, but a trail is left by drop pods after landing. This can be dangerous, as an aggressive prospector(s) may try to attack. This can also work to draw weaker or outnumbered prospectors away, especially when landing in a team.

There are currently three distinct regions of Fortuna III a prospector can choose to drop onto. These regions are also known as maps, those being Bright Sands, Crescent Falls, and Tharis Island. Each has differing structures, landscapes, flora, loot, and difficulty. Bright Sands is the easiest of the three, containing less dangerous enemies overall, but having less loot. Crescent Falls is more difficult, containing more enemies but having better loot. Tharis Island is an extremely different map, much smaller and more difficult then the other two.

Bright Sands is the first map in The Cycle: Frontier.

It features a central station carved into a hollow mountain, surrounded by cliffs, a swamp, a forest and grassy areas. It is surrounded by water on almost all sides. Its Danger Level is low. This map often has the max amount of prospectors possible, due to its popularity as an entry-level map.

Crescent Falls is the second map in The Cycle: Frontier.

It is slightly larger than Bright Sands and features a huge ancient ring structure surrounded by hot springs, farmland, jungle, fungi and desert. It also features a large number of small rivers all leading into the salt flats. Crescent Falls also includes a lot of old structures scattered around the map compared to Bright Sands. Its Danger Level is moderate.

Tharis Island is the third map in The Cycle: Frontier.

It is a small island far of the cost of Bright Sands. It features abandoned Korolev mining outposts and docks. As well as high tech Osiris laboratories and other infrastructure. The reset of the island is a mountain with a massive labyrinthian cave system spread throughout. The caves have ancient Progenitor structures and artefacts, long forgotten machines and The Forge hidden in its depths.

Retrieved from "https://thecyclefrontier.wiki/w/index.php?title=Fortuna_III&oldid=7692"
Cookies help us deliver our services. By using our services, you agree to our use of cookies.