From The Cycle: Frontier Wiki
Jump to navigation Jump to search
Crusher 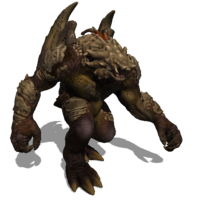 A massive creature with thick armor and a giant health pool. It can throw rocks, charge at prospectors, and slam the ground around itself. All of its attacks are devastating.

When the Crusher has not spotted a prospector it roams around its spawn area.

When a Crusher notices a prospector it unleashes a deafening roar. This alerts other creatures in the area of the prospectors presence.

The Crusher has 4 different attacks.

The Crusher's weak spot is located on its back beneath its grabbers. If the orange ankles of the Crusher take enough damage, it will cancel whatever attack its performing. It then kneels over, and is stunned for a short time.

The Crusher has one variant, the Alpha Crusher.

This is detailed information about the Crusher

Weakspots mainly. Not sure how to handle this yet so leave blank 🙂

The laminated effect of the Ivory Tessellation weapon coating is achieved by using Crusher skulls as a main ingredient in the coating's manufacturing process.

Retrieved from "https://thecyclefrontier.wiki/w/index.php?title=Crusher&oldid=4787"
Cookies help us deliver our services. By using our services, you agree to our use of cookies.