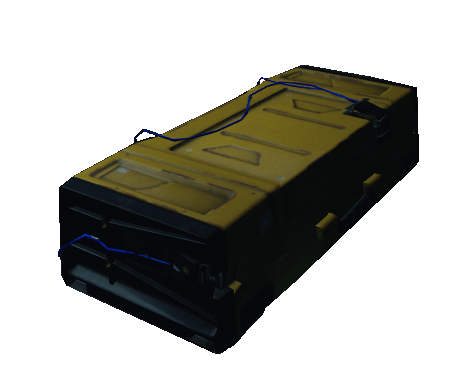 There are 8 Dead Drops on Bright Sands and 7 on Crescent Falls.

There are 3 Dead Drops at Base Camp: Main Office, Gate A and Gate C.

This Dead Drop is located at the west side of the compound. It is to the north of the massive opening in the building.

This Dead Drop is located at the east side of the compound. To reach it, enter the compound from the outside by going up two flights of stairs next to the cliff wall. Enter the small building at the top and go through the left door, entering Base Camp. Then cross the bridge to the otherside. The dead drop will be at the other side next to a big crate. Alternatively, leave Base Camp by going through the flights of stairs at the east side of the compound, and turn right before the bridge.

This Dead Drop can be found by going to southeast side of East Collection Point and going down into the tunnel. It is located at the end this tunnel, next to some mining equipment.

Comms Tower has a big tower on its west side. This Dead Drop is at the south side of the tower. It can be reached by entering the compound from the east and walking to the tower, or by climbing up one of the ledges and sneaking through the fence closer to the tower.

The Satelite Dish Dead Drop can be found near the big satelite at Comms Tower. It is located shortly after the main entrance to the Comms Tower area, next to some horizontal pipes.

This Dead Drop is in the middle of the Swamp Camp compound, tucked under a curved root. Behind the root is a collapsed building. Next to it is one of the ribs of the massive skeleton found there, and an iron grated pillar is to the right of the root.

This Dead Drop can be found under a desk in Waterfall Labs. It can easily be found by approaching the compound from the south and entering the building. Go up the stairs and follow the tunnel to its first junction. At the left of the junction will be the desk it is under.

Nutrion farms processing has 2 dead drops, one in the office and one just outside in the storage bay.

The Nutrion office dead drop can be found in the office on the top floor in the south-west end of the Nutrion farms processing building.

The storage room dead drop can be found on the north side, outside the Nutrion farms processing building.

The garage office dead drop can be found in the office near the garage in Greens prospect.

Starport Admin has 2 dead drops, one in the corner of the server room and one in the cafeteria.

The cafeteria dead drop can be found at one of the top floors of starport admin, lying under a table in the corner of the room.

The server room dead drop can be found at one of the bottom floors of starport admin, in the corner of the server room.

Retrieved from "https://thecyclefrontier.wiki/w/index.php?title=Dead_Drop&oldid=8507"
Category:
Cookies help us deliver our services. By using our services, you agree to our use of cookies.