From The Cycle: Frontier Wiki
Jump to navigation Jump to search
Laser Drill 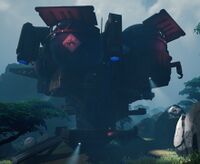 Called down from space and standing as a massive structure, the Korolev Laser Drill offers prospectors the possibility to mine Letium.

The yield dumped into containers mainly consist of Letium, but other minerals are also found such as Titan Ore, Focus Crystals and Pure Veltecite. There are three loot containers on the drill. Each container has the same loot chances for each phase, following the next table. From each drill, there is a minimum of 21

Letium and a maximum of 36

Retrieved from "https://thecyclefrontier.wiki/w/index.php?title=Laser_Drill&oldid=8563"
Category:
Cookies help us deliver our services. By using our services, you agree to our use of cookies.