Lucky Leafman is a brightly-lit bar located around the centre of Prospect Station. It is owned and operated by Badum. It is named after the Leafman, a passive creature found on Fortuna III.

It currently serves one purpose, being an area for Badum to issue tutorial quests from, akin to the Factions' HQs. Once the initial missions are complete, nothing can be bought or sold here, and no new quests will be given. 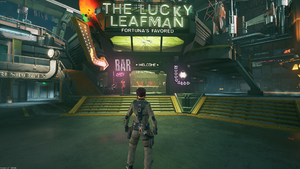 An outside view of the Lucky Leafman bar 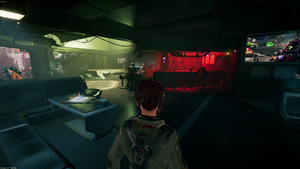 The inside view of the bar

NPC prospectors populate the bar. They cannot be interacted with and they do not move from their sitting positions.

There's a dancing Co-Bot hologram at the bar. You can interact with it to change the way it dances.

Retrieved from "https://thecyclefrontier.wiki/w/index.php?title=Lucky_Leafman&oldid=4468"
Cookies help us deliver our services. By using our services, you agree to our use of cookies.