From The Cycle: Frontier Wiki
Jump to navigation Jump to search
Ticks 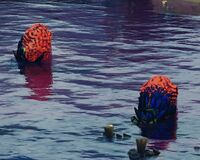 When no prospectors are around the Blast Tick crawl around looking for potential prospectors. When it notices a prospector it continuously makes a high pitched insect like sound, before it starts chasing you.

The Blast Tick has one variant, the Acid Tick

The Acid Tick is a green version of the Blast Tick with a green thorax, the stats are the same but when it explodes it leaves an acid puddle on the ground that deals damage when standing on or walking through.

This is detailed information about the Blast tick.

Weakspots mainly. Not sure how to handle this yet so leave blank 🙂

Retrieved from "https://thecyclefrontier.wiki/w/index.php?title=Ticks&oldid=4789"
Category:
Cookies help us deliver our services. By using our services, you agree to our use of cookies.