From The Cycle: Frontier Wiki
(Redirected from Jeff)
Jump to navigation Jump to search
Marauder 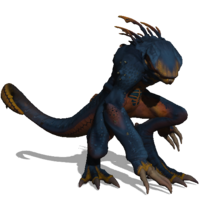 The Marauder, also called Jeff, is a formidable creature capable of attacking prospectors from a distance with two different spit attacks and a powerful melee attack. It is very fast, has high Hit Points and high Armor. Like every hostile creature the Marauder will attack you on sight or upon hearing a sound, such as a gunshot.

When a Marauder sees or hears a prospector nearby it roars, alerting other Creatures nearby of the prospectors presence. When other creatures are alerted in this way they start attacking the prospector. After finishing the roaring it will come chasing after the prospector.

Upon noticing a prospector, the Marauder will roar to signal being alerted. It then either charges the target to attack in melee, dealing heavy damage. If this fails, it will use a spitting attack from a distance. This shot is heavily led and can be dodged by changing direction upon firing. It also has a secondary spit attack with an extra effect of leaving pools of acid on the floor that slow and damage prospectors that touch it.

The Marauder's weakpoint is revealed when it roars, typically after charging. If it takes enough damage during this period, it staggers backwards.

The Marauder has one variant, the Savage Marauder.

This is detailed information about the Marauder.

I dont know how to fill in this category

Jeff got his name on the 22nd of June in 2021, when a Discord moderator named cc_Stalker_Ente got stuck on a rock below Skeleton Observation site for 30 minutes surrounded by 2 Marauders. Stalker emptied her entire bullets into the Marauders in an attempt to kill them, but then the storm started. While waiting out the storm Stalker watched an entire episode of the cartoon "American Dad" and decided to name the Marauder after "Jeff Fischer", one of the main characters of the show.

The name then spread throughout the players of Closed Alpha 2 and was commonly used during that time. At one occasion, one of the community managers had to explain to the developers who Jeff is. The name was spread further when a community member told Summit1g (a popular Twitch streamer with over 5 million followers) on stream that the Marauders are nicknamed Jeff. Summit1g used the name, and it has been in use ever since. 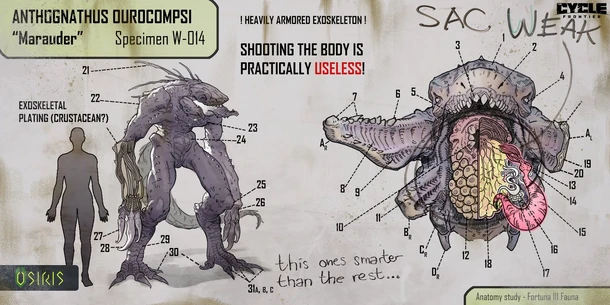 Concept art for the Marauder.

Retrieved from "https://thecyclefrontier.wiki/w/index.php?title=Marauder&oldid=5427"
Category:
Cookies help us deliver our services. By using our services, you agree to our use of cookies.